The Iron Bank is the Iron Bank. There is no someone . . . And a temple is comprised of stones. One stone crumbles and another takes its place. And the temple holds its form for 1,000 years or more. That’s what the Iron Bank is… a temple”

I have long since given up both second guessing Bill Belichick and trying predict what he’s going to do. For all his faults, both real and exaggerated, the man knows how to construct a roster. There is no player (not even Tom Brady) whose departure alone could shake the foundation of the New England Patriots.

Absurd profits and equally absurd injury rates have created a ruthless labor market in the NFL. No matter how many rules they change, it will always be a shockingly violent game. Players will, therefore, always be one play away from a career ending injury.

The only way a franchise survives this unpredictable turnover is to walk the line between shrewd and heartless. There is no way to get around that. Hence why even an 1890’s factory owner would look at an NFL contract and say, “Damn, that’s harsh”.

No one understands this better than Bill Belichick.

In this Tweet plagued world of ours, no one has any respect for history. And I’m not talking only about how most of you didn’t get the factory reference above. Sure a trade of Rob Gronkowski would sting for a while. But, hey, it would also lead to an heartfelt reunion some day. In the greater historical narrative, however, it is unlikely to matter all that much.

Deion Branch (pictured above) was the first player traded away that I can recall spurring an “end of the Patriots dynasty has come” debate. Followed shortly by the “what will Tom Brady do without *insert name here*?”In the end none of that has mattered. The Patriots are an unstoppable force. Even if they truly are on their descent, what they have accomplished as a franchise will never be matched. Somehow they have been elite for 18 years.

Every year they have to be considered the Super Bowl favorite. And while Rob Gronkoswki is a great player, he’s just one of many. For all we know Belichick has already found his replacement at some school no one has ever heard of. I can’t be the only one expecting them to use a fifth round pick on Joe Anonymous from The Southeastern West Arkansas State Tech University College, North Arkansas campus, right? 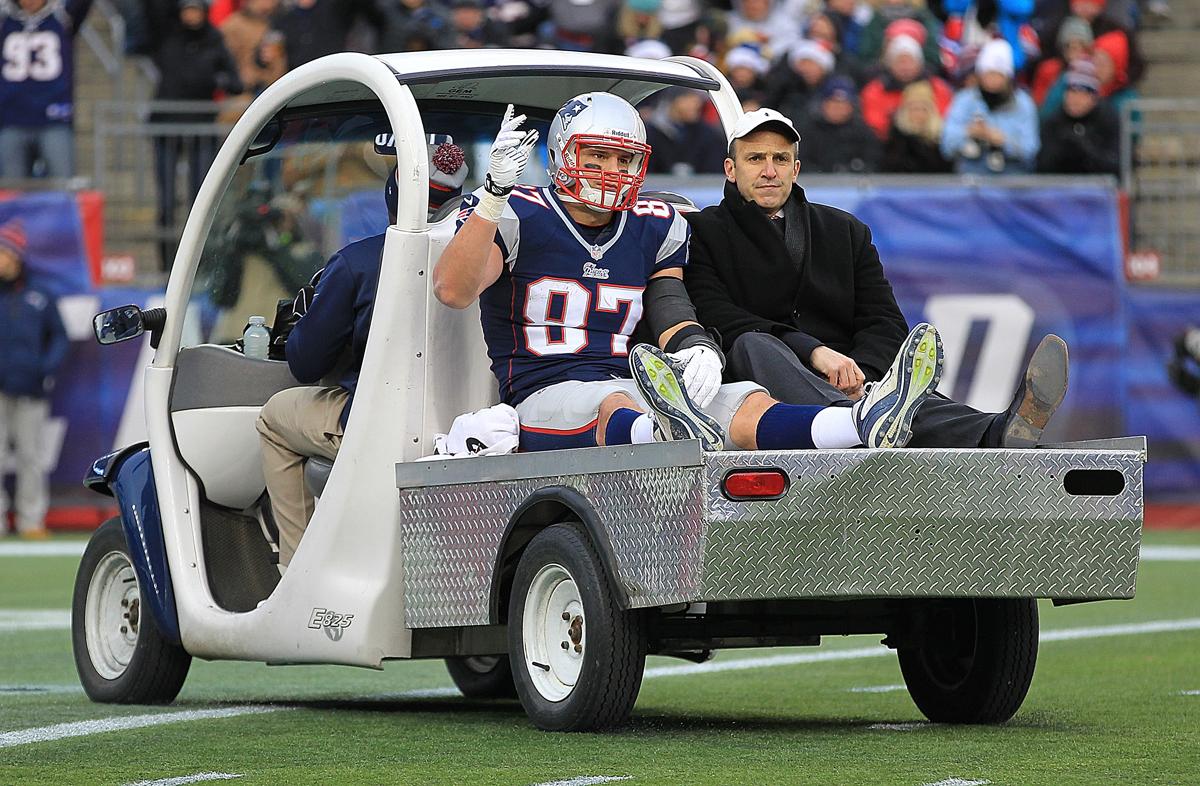 So, what am I getting at here? I’m saying that it’s pretty pointless to sit around and once more debate if the Patriots dumping a popular player will result in their demise. It hasn’t mattered before and I doubt it will matter now. Since this topic will not go away, let me explain why I find it unlikely Gronk will be traded this year.

The Patriots will win 11-14 games again. If Gronk has to miss 10 games in the regular season in order to be 100 percent in the playoffs, no problem. The Patriots don’t play to win games. They play to win Super Bowls. On third and goal from the 10 yard line with the Super Bowl hanging in the balance, name one receiver in the entire NFL that you’d rather have.

A recurring back injury is no laughing matter. I’m 30 and tweaked my back when I sat down to write this article. Seriously, I’m not even joking about that. This is why I do find it hard to believe that Gronk really wants out of New England. Other teams are trying to make the playoffs and cannot afford a pricey tight end. Let alone one that will not play every game. The Patriots are the only team that can provide him a roster spot without piling on huge expectations. If he’s out there, great. If not, Tom Brady will still be surrounded by quality players and will get his 300 passing yards.

I’m generally apathetic about the Patriots. As a resident of the greater Boston area, I make it my business to stay current on all things Tom Brady. Lest I open myself up to hard stares. Outside of that, I don’t really care all that much. I will say I love Rob Gronkowski. It’s impossible not to. I am not a particularly religious person, but if I heard someone say they hated Gronk, I would assume they had been possessed by a demon.

Seriously. He seems like a genuinely good person. So, whatever does happen with him next season, he’s going to be fine. According to him he hasn’t spent a cent of his NFL money, just his endorsement money. If he wants to retire, he should. If he wants to stick around, he should. There’s no better spot for him than New England.

Ultimately this will all come down to Belichick. Is it worth keeping Gronk around? If the ultimate goal remains to win the Super Bowl, I would have to say, “yes”. While the rumors of the massive rift between Belichick and his team are perfectly believable, this isn’t the part of the story that matters.

Too often these stories get lost in the catchy headlines. I have always found this annoying. There is a really great story surrounding the New England Patriots. It is a story of how to build a franchise when a violent game creates a violent economic market. Maybe that’s become too stale. Maybe people have finally had enough of the authentically Boston manner in which the Patriots deal with the media. Perhaps that is why they are so desperate for a new story.

As fans we owe it to ourselves to not lose our grasp on history. Always remembering the story of the dynasty is what matters, not it’s eventual downfall.