Now that I’ve wrapped up my rankings of the 25 and under QB’s for 2018, I’d like to take some time to discuss the rookie quarterbacks. Particularly, when they might get their first start. Believe me the irony that I made a point of excluding them from the previous rankings because they would dominate the training camp headlines is not lost on me. However, as I discussed the possible futures and timelines for some of the lower ranked QB’s, it occurred to me how much those timelines were contingent on the development of the rookie quarterbacks.

With that in mind, let’s delve into the muddled world of speculation once more . . . 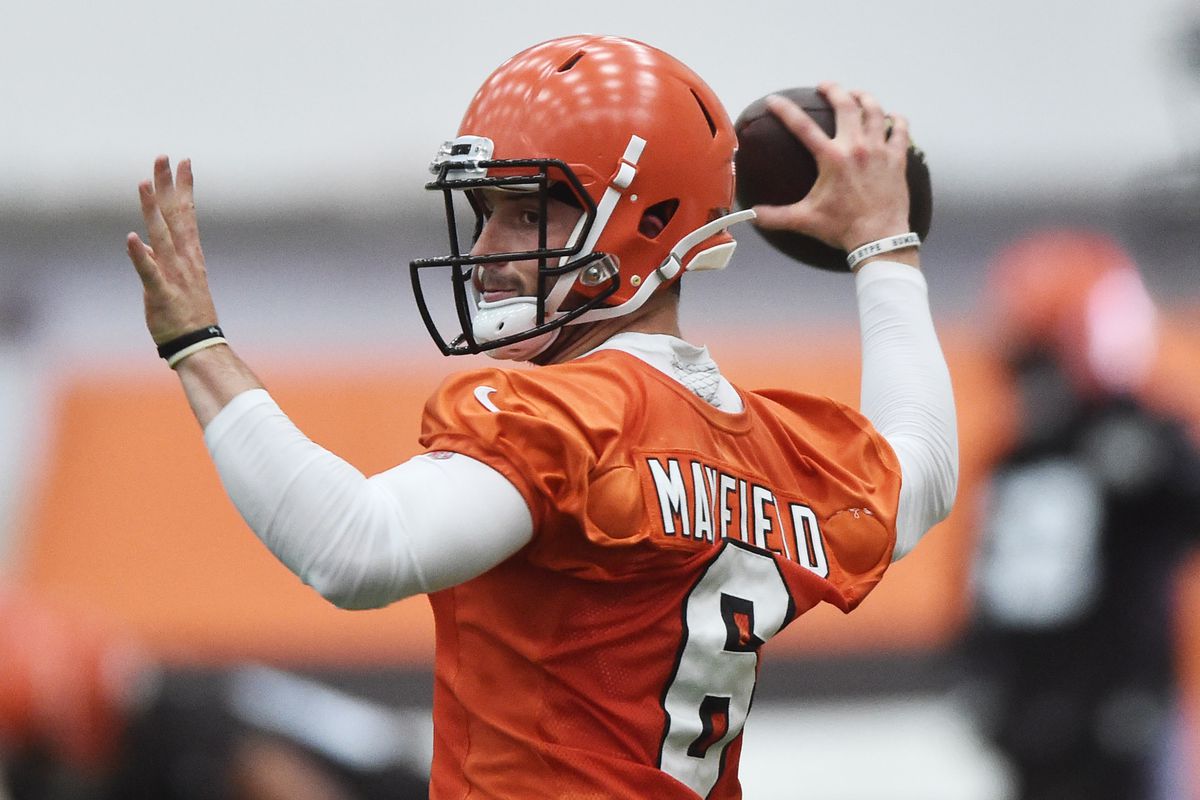 I really struggled with this prediction because the Browns schedule is brutal this season. Their bye week is Week 11 and before that they have to play: Pittsburgh twice, New Orleans, Baltimore, Oakland, Kansas City, and Atlanta. Even though this, on paper at least, is the most complete team they’ve had in over a decade, I can’t, in good faith, call them a favorite in any of these games. During this stretch, they also have games against the Jets, Bucs, and Chargers that they could win. Still, that would leave them at 3-7 entering the bye.

If that happens, there’s a very good chance they turn the team over the Mayfield in Week 12 in a game, ironically, also against the Bengals. At that point, Hue Jackson has no choice but to start Mayfield in a desperate attempt to stick around for 2019. If, however, they can steal one or two of the seven difficult games and enter the bye week at 4-6 or 5-5, then there’s no reason to start Mayfield. After Week 12 they play: at Houston, vs Carolina, and at Denver. Odds are they lose at least two, if not all three games. At that point they sit at 5-9 or 4-10 entering Week 16. They might as well start Mayfield. A home game versus the Bengals and a road game against the Ravens is a good litmus test for 2019. For Mayfield, Jackson, and the rest of the team.

Unlike Hue Jackson, Todd Bowles shouldn’t have to fear for his job at the end of this season. The Jets exceeded everyone’s expectations last year despite their 5-11 record. Entering the off-season they knew they would target a rookie quarterback, so if they wanted to replace Bowles, they’d have done it. Since he’s still there, we can assume it would take disastrous regression for him to lose his job. Particularly on defense, as he is a universally respected defensive coach.

This combined with the presence of Teddy Bridgewater and Josh McCown gives Darnold a “red shirt” season in 2018. While all the tools are clearly there, his performance against Ohio State highlighted his need for further development. He’s only 21 years old, there’s no reason to rush said development. Waiting a year also gives the Jets the 2019 Draft and 2019 free agency period to add more skill position players.

This one might be wishful thinking. The Bills are coming off of their first playoff game since the Music City Miracle (sorry, Bills’ fans) and this might force Allen onto the field early. Especially if they are hovering around the 4-4, 5-3 mark at mid-season. If this happens and Sean McDermott feels it’s A.J. McCarron holding them back, he might turn to his rocket-armed rookie. Don’t forget, a similar situation last season lead to that five interception half from Nathan Peterman.

I hope this doesn’t happen. Allen, like Darnold, really needs his franchise to take a long term approach to his development. Watching him throw deep routes at The Combine certainly made me wonder if whoever drafted him should just put him on the field right away. So, far be it from me to judge McDermott if he had a similar reaction. The receiving corp and running back rotation are certainly good enough to cover rookie gaffs. The fear would be Allen developing poor habits to compensate for his erratic accuracy. This is something better left to the practice field. I would also be wary of letting him start Week 16 in Foxboro as, you know, Patriot’s fans. 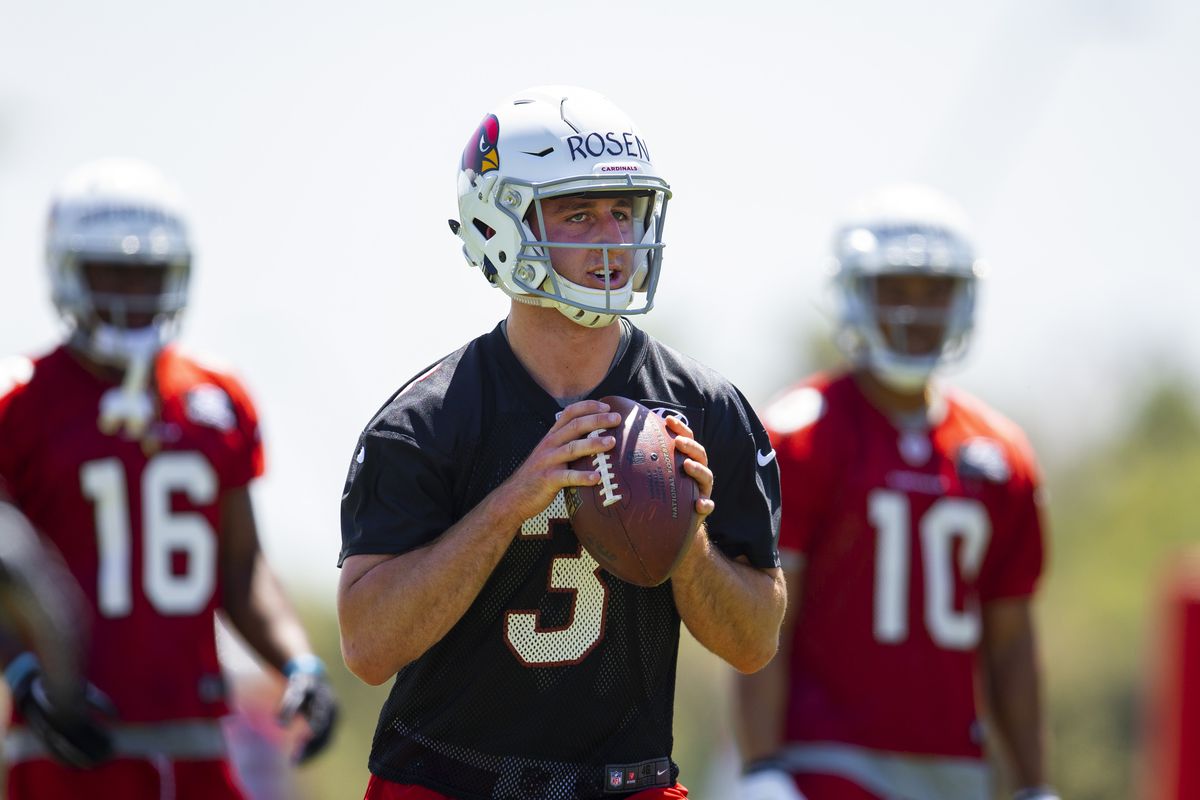 As I stated in a previous article on Sam Bradford, NFL teams know what they’re getting  He’s a nice guy, a decent QB, and a huge injury risk. I feel bad predicting injuries, but here we are. The odds of Bradford starting all 16 games are slim to none. If and when he does get injured, the Cardinals could turn the offense over to Mike Glennon. He has starting experience and, like Bradford, has shown he can make enough throws to keep his team competitive.

Having said that, I don’t see why Arizona would turn the team over to him. It has been noted by plenty of pundits that of all the rookie QB’s, Rosen seems to the most NFL ready. Reports are already coming out of the Caridnals offseason program that Rosen has been leading two minute drills. Patrick Peterson has gone on the record as saying Rosen has exceeded expectations in these drills. This is usually the last test of a rookie quarterback and could mean the Cardinals are ready to let it ride with Rosen. As with Buffalo, Ariziona has enough talent and experience at the skill positions to mask any rookie hiccups. 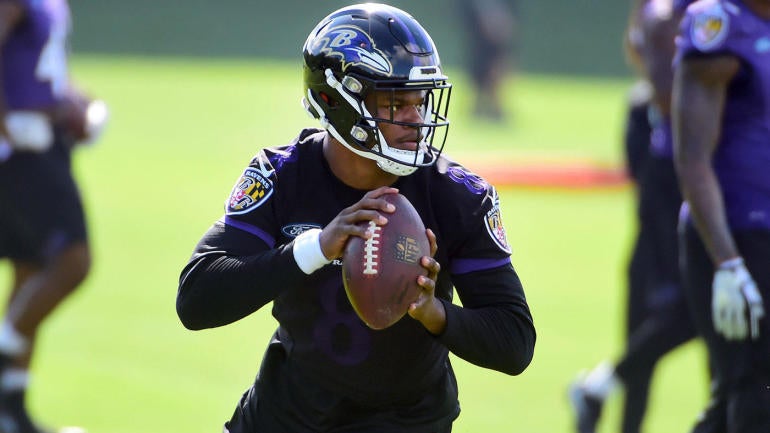 It is of the utmost importance you understand this prediction is in no way fueled by a lack of faith in Jackson’s ability. Nor is it a ringing endorsement of Joe Flacco. Jackson won’t start until 2020 because the Ravens need to seriously overhaul their offense before he can take over. He’ll need to run a version of the spread offense and before that can happen, the Ravens need a serious infusion of speed and youth on the outside.

Ozzie Newsome did a great job securing not just Jackson, but two tight-ends who will be crucial to his success. He also added a wildcard tackle in Orlando Brown who, if he keeps  it together, should plow open plenty of running room. The running back depth is OK, they still need a Duke Johnson-Alvin Kamara type back stretch the defense laterally. Now it’s up to the current leadership to add the speed Jackson needs to open the field from the outside. Once these pieces are in place, watch out NFL. Jackson is a much better passer and much smarter runner than people seem to think.