The Broncos lost to the Bears on Saturday, but much like the points in “Whose Line Is It Anyway” (and like anything that happened after Chad Kelly stepped off the field), it really doesn’t matter.

How much of the preseason does matter? I’ve been wrestling with that question for a while now. I would say it does mean something, but then again I was positive Jack Williams was going to be an all-time great after his ridiculous pick-six in the 2008 preseason finale.

So just like it wasn’t worth getting too worked up over Denver’s abjectly shitty performance against Minnesota, it’s probably best not to get too excited over the Chicago game.

That being said, there were a lot of highlights (and lowlights) worth talking about from Saturday: 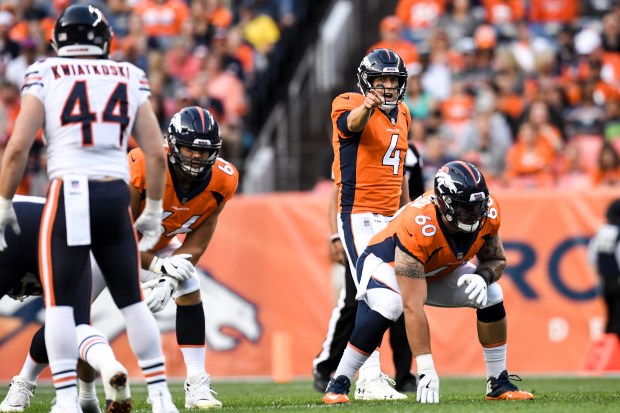 I know everyone was ready to push Case Keenum off of Pike’s Peak and trade for Teddy Bridgewater, but the first teamers looked cohesive and strong on their last two drives.

Keenum and Sanders have obvious chemistry (so much so their wives may want to keep an eye out) which led to three completions, including a big third down pickup.

Keenum missed a couple end zone shots, but that kind of stuff is why you have the preseason. It’ll get ironed out. I hope. He has a really quick release and isn’t afraid to use the middle of the field, as we saw on the throw to DaeSean Hamilton.

Royce Freeman looks like the best back on the team. I still think they’ll keep Booker because he’s the only true veteran, but Freeman has to get the bulk of the carries.

There’s really nothing like seeing Swag fire a laser beam touchdown to Courtland Sutton. He’s got a cannon attached to his right shoulder, and oh buddy, he uses it.

Some people (not going to name names but the founder of That’s Good Sports) thought that Kelly would regress against the two’s, but he just seemed to get better. I, of course, would never make an incorrect prediction (and admit it).

He even seemed to make better decisions. Against the Vikes, he was a little sloppy with the ball at the end, but I think that’s because he was trying to win the game (which was admirable but ultimately pointless).

As much as Paxton Lynch very clearly is not good at football, I think it’s wrong and pointless to boo him at this point. He didn’t draft himself, although he probably has traded for himself and made himself a 99 overall in Madden.

Whereas Kelly got better with the two’s, Lynch was just as bad against worst competition. He started to get things going on the final drive, but it was too little too late.

It’s going to be quite the dilemma on cut day for the Broncos. Will they eat Lynch’s cap hit, or keep him over a more deserving player?