This upcoming season will be Frank Gore’s 14th in the NFL. Gore has been in the league for so long, it’s easy to forget just how remarkable his career has been. Not just in terms of his play on the field, which has been exceptional, but also in terms of how it all started.

Gore was the sixth running back taken in the 2005 Draft. He was selected after Ronnie Brown, Carnell “Cadilliac” Williams, Cedric Benson, JJ Arrington, and Eric Shelton. Shelton I’ve never heard of, so I assume he didn’t do much. The others, however, all had their moments in the NFL.

None came close to the productivity or longevity of Frank Gore, nor did they have to navigate the same level of on and off the field adversity. There are few players that could have handled the cards he was dealt. That is why it is not an exaggeration to call his career miraculous. Let’s look at why that is . . . 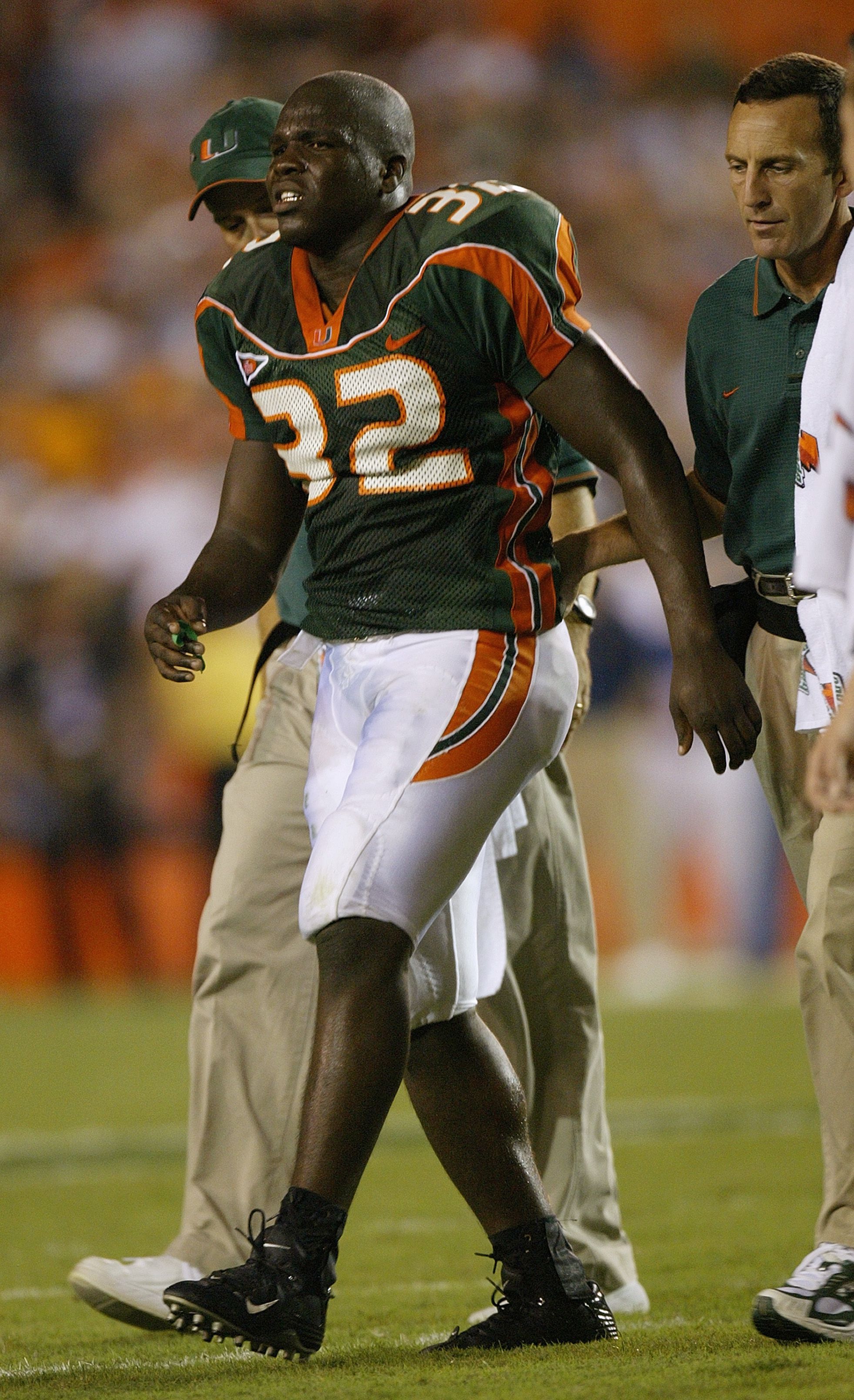 Many people forget that Willis McGahee was not supposed to be the starting running back for the 2002 Miami Hurricanes. The only reason he found himself in the starting line-up was because Gore tore his ACL in spring practice. That means Gore’s back-up rushed for 1,753 yards and 28 touchdowns.

Gore returned for the 2003 season, then tore the same ACL against West Virginia. In 2004 he was able to play in 12 games, rushing for 945 yards. When looking at Gore from that perspective, it’s easy to imagine the narrative in 2005 being centered on a team that reached for a player in the third round instead of uncovering a long term starter. After all, two injuries and a decent season at a suddenly floundering program are not the prototypical attributes of a solid NFL prospect.

That is what Gore had working against him when he entered the league. Many running backs are never the same after one ACL tear, let alone two in two years. I am certainly guilty of thinking at the time that he would lucky to make it five seasons.

His Spot on the All-Time Underappreciated Player

Overcoming the knee injuries alone put him on the All-Time Underappreciated Team once he finished his third season. By season seven he was in the running for captain, which he locked up after season ten. Coming into year 14, he’s Player/Coach/GM/Owner for Life.

I hate when commentators say, “Gore overcame injuries from college” at the beginning of his games. “Overcame injuries” does not do it justice. They should at least say, “overcame two ACL injuries on the same knee”. Or if they’re looking to fill some airtime,

“overcame two devastating ACL tears on the same knee in two season. The fact that he is even walking around right now, let alone rushing for 1,000 yards year after year, is a miracle. We should all listen to whatever health tips he has to offer as it could strengthen the longevity of the human genome”. Most fans today have also seemed to forget all the turmoil he dealt with during his first six seasons in San Francisco. Hindsight has shown us what kind of team the 49ers could have had with Alex Smith and Frank Gore. And man what a team they wasted. What Kareem Hunt and Alex Smith were able to do in one seaon, Gore and Smith could have been doing for almost a decade.

Gore has proven to be remarkably consistent as a runner and, perhaps even more impressively, as a receiver. No matter the formation or blocking scheme, Gore can always be relied upon to find a running lane. This was needed as the 49ers kept switching offensive coordinators, resulting in Smith having a terrible time trying to learn how to be an NFL quarterback. No matter what they tried, the 49ers couldn’t figure out a complimentary passing system.

Gore put up his numbers and gave 49ers fans some ray of hope until Jim Harbaugh finally arrived on the scene. He blended Gore’s unrivaled adaptability with some college parlor tricks and produced the first competent offense Gore had ever seen. It didn’t get them a Super Bowl victory though. They got really close when Smith was replaced by Colin Kaepernick. The run/pass option scheme fueled by Gore and Kaepernick almost brought them a ring. Until Joe Flacco, of all people, got in their way. The next season Kaepernick threw an unnecessary fade broken up by Richard Sherman, finishing six points short of another Super Bowl berth.

What happened at the end of his 49ers career was simple: they forgot the offense, no pun intended, needed to run through Gore, not Kaepernick. The only reason Kaepernick was able to get away with shaky mid-level accuracy was because the linebackers had to be wary of Gore leaking into the flat. Not unlike the Jets with Mark Sanchez, the 49ers decided to slowly move away from the running game and let their young quarterback take on more responsibility. And like Sanchez, Kaepernick was not up to the task.

In a flash it was over and Gore found himself headed to the Colts.

Gore’s Still Got It

After all of it, Frank Gore is still an effective running back. He’s put up pretty remarkable numbers for a back rushing behind an offensive line so putrid, they let another team lacerate Andrew Luck’s spleen (seriously, how does that even happen?). The mere fact that Gore could put together strong seasons after all the injuries and all the poor coaching decisions is indeed miraculous. Every football fan should take some time today and reflect on his career.

From an oft-injured after thought at Miami to a steady workhorse in San Francisco to a back relying on sheer will in Indianapolis, Frank Gore has seen and done it all. He’s done so often flying under the radar. Meanwhile the Chris Johnson’s and Le’Veon Bell’s of the NFL garner the accolades.

When he does finally decide to retire, he should go the Hall of Fame on his first ballot. Then they should do the right thing and give him his own wing where everyone can learn his story . . .