2007 was supposed to be the year the Indians won the World Series. When they went up 3-1 on the Red Sox in the ALCS, it sure looked like they were on their way. Games five and six would feature 19 game winners CC Sabathia and Fausto Carmona. For most teams, this would be a guaranteed victory. Most teams . . .

Of course they would go on to lose the series. The next season Sabathia was traded and Carmona, whose real named turned out to be Roberto Hernandez, was never able to replicate his 2007 success. Midway through the 2009 season, it became clear it was time to blow it up and start over again.

Over the next two seasons, the Indians started a rebuild centered around Grady Sizemore, Astrubel Cabrera, Matt LaPorta, Justin Masterson, and Jason Knapp. Of these five players, only Cabrera is still active. Knapp had such terrible injuries, he never even made it to made it to Double A. Masterson looked like an ace before falling apart. As for LaPorta and Sizemore . . . ugh, I used to be so excited about them, I just cant.

Needless to say, the rebuild did not unfold the way anyone thought. Then a little known fringe prospect named Corey Kluber arrived on the scene. He would emerge as the leader of an unlikely group of starters. Like the title says, they were the baseball version of the Island of Misfit Toys. Each one had a major flaw. The Indians somehow were able to mold them into the least expensive, most effective rotation in baseball.

The Flaw: Walks. He could throw hard and had an early version of his wipe out slurve, but no idea where the ball was going. When he came over, he looked like a candidate for the bullpen. Even the hardest throwers are hit-able if their pitch does not move and they cannot locate.

The Fix: During a rain-out, he was in the Triple A bullpen with pitching coach Ruben Niebla. Niebla suggested he try throwing a two seam fastball. Everything changed that day.

Throwing a two seamer forced Kluber to take a little off his fastball. Not unlike CC Sabathia, this made him a better pitcher because he had better control. Sure he can still ramp it up into the mid-90’s when he needs to, but he’s at his best when he’s between 90-93 with good movement. He is especially nasty when he’s throwing the two seamer inside to lefties. Who can blame them for leaning away as 93 MPH fastball makes a beeline towards their hip?

It’s really amazing no one thought of this pitch sooner. The two seamer coming out of his hand looks very similar to his cutter. This allows him to throw the two pitches in the same spots. The hitter must decide if the ball is going to sharply drop away or sharply zip towards them. This is an impossible choice.

In the video above, you can see how effectively he uses the different movements of his pitches. The slurve, when it’s on, is unhittable. Still, it’s not hard to imagine it was somewhat predictable when he was in the minors. Without the two seamer, he fell into a bad habit working exclusively on the outside corner. Now he has the missing piece and is not afraid to come inside. This makes him that much more unpredictable. 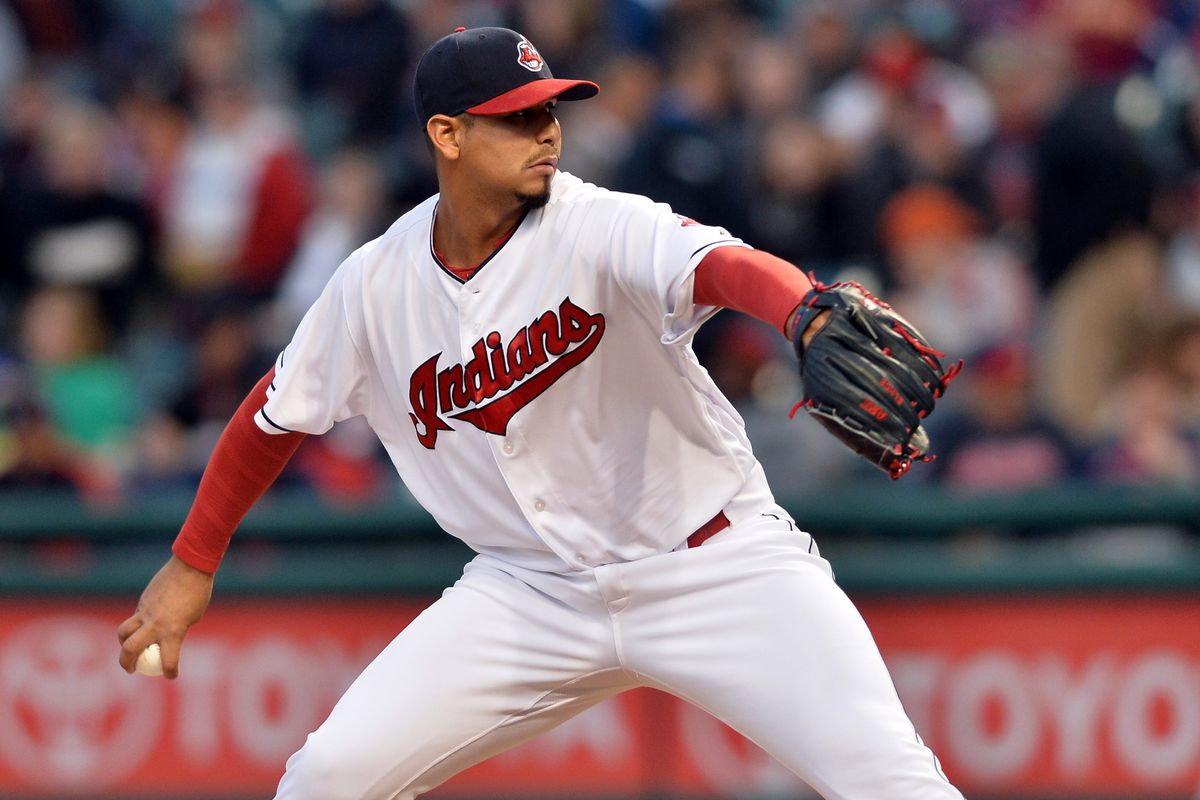 The Trade: The Indians send Cliff Lee and Ben Francisco to the Phillies for Carrasco, Lou Marson, Jason Donald, and Jason Knapp

The Flaw: Temper. Early in his career he was suspended twice for throwing at batters. He also would fall apart whenever he started giving up hits. His answer was always to throw harder. This threw his mechanics completely out of whack.

The Fix: I was going to write, “he was moved to the bullpen”, but that doesn’t do it justice. A more accurate way to put it would be, “he was exiled to the bullpen”. The Indians only put him in the 2014 rotation because he was out of options. After a few starts, they sent him to the bullpen.

I can remember seeing him pitch at Fenway a couple months after that. He came in and threw three shutout innings. A little after that, he was given a spot start. He’s been in the rotation ever since.

Three things changed when he went to the bullpen. He started throwing exclusively out of the stretch. This finally cleaned up his mechanical flaws. He stopped losing balance in his wind-up because he no longer used a wind-up.

Carrasco also learned to attack hitters with strikes. Relievers often do not have the luxury of getting cute on the corners. If they come in with runners on base, they must throw strikes. A manager can live with hits, they cannot live with a reliever that walks batters. This changed mindset finally helped Carrasco relax and take it one batter at a time.

During his time in the bullpen Carrasco also added the split-change. This is a great compliment to his fastball. It must be frustrating for batters to try and get around on a 97 MPH fastball only for it to drop completely out of the zone. Then try to take the same pitch, only for it to actually be the 97 MPH fastball the second time.

The Flaw: He’s smarter than everyone else. I’m not even being sarcastic. He is one of the smartest people in baseball. I imagine if I met him and didn’t know who he was, I would assume he was an engineer.

The Fix: Let Bauer be Bauer . . . in moderation. The Diamondbacks were too old school for Bauer. This caused them to sour on him quickly. The Indians were more open to his unusual methods, but did push back a bit. Last year he turned it all around when he finally started using his curveball more. This is his best pitch and is one of the better ones in baseball.

I was going to keep writing, but honestly, just watch the video above. No one can describe his process quite like Bauer. The only other thing I will say about Bauer, is that I have always been impressed when I’ve seen the Indians play and he isn’t pitching. In the games I’ve seen, he’s on the top step of the dugout next to the pitching coach watching every pitch.

This research based approach may not be used by pitchers in the future. Not because it’s not a good idea. It will be because they do not have the scientific skill of Bauer. It is truly remarkable.

The trade: The Indians acquire Mike Clevinger for the artist formerly known as Vinnie Pestano.

The Flaw: His wind-up. As hard to believe as it is, the Mike Clevinger wind-up you see now is actually a simplified version.

The Fix: Somehow for such a strange motion, I can’t find a good video to show it. Do yourself a favor and check him out if he’s on TV. I’ve never seen a wind-up quite like it.

Anyway, the Angels were desperate for a reliever and the Indians sent over the once solid Vinnie Pestano. It’s sad, but he was soon out of the league. In return they got Clevinger. He had injury trouble and needed to dial back all the wacky motion. The Indians were able to help him find a more consistent delivery and he really took off. He throws hard and has great off-speed stuff.

He uses his long arms to whip the ball from an almost three quarters angle. Until it gets there, it is never clear which pitch he is throwing. He is still can be as wild as his hair, but if he can throw strikes consistently, watch out.

The Indians have all four of these guys locked up through 2020. What started as a bizarre experiment should keep them competitive so long as this group is together. Please remember this the next time ESPN writes a “the Indians window is closing” article.