After eight seasons and 531 receptions, the Dez Bryant Era is over in Dallas. Like most of the Cowboys over the past two decades it will be difficult to define his career. There were many highs, many lows, and likely recurring nightmares of Aaron Rodgers’ heroics. Perhaps the defining moment for Bryant is the catch/no catch in Green Bay. Without a Super Bowl or even a deep playoff run, I’m willing to bet that’s how most fans will remember him.

Many pundits have pushed a narrative that the Cowboys will be in trouble without Dez (as is their go to when any high paid player leaves). I, on the other hand, understand the Cowboys desire to move on. Dez can still be a productive receiver in the NFL, but he’s no longer worth a big chunk of their cap space. With only one franchise tag and both Zach Martin and DeMarcus Lawrence headed towards free agency in 2019, it made zero sense for the Cowboys to keep a wide receiver who cannot say healthy. And who, as I hope to lay out below, is no longer necessary for their offense.

The Plan Without Dez

Even though their vaunted offensive line faltered late last season, do not write this group off. Zach Martin is one of, if not the, best guard in the NFL. Tyron Smith and Travis Frederick are perennial Pro Bowlers, La’el Collins probably would be on any other team. New to the group is second round pick, Connor Williams. Due to injuries and arbitrary concerns about his arm length, Williams fell all the way to pick 50. Though he was a left tackle in college, look for him to be an immediate starter at left guard, meaning an elite unit somehow gets better.

If the line can stay healthy this season, I expect huge things from Ezekiel Elliot and, by extension, Dak Prescott. Elliot nearly ran for 1,000 yards last season in only 10 games, behind a mediocre line, so having him running behind this line is almost unfair. He is one of the rare running backs who perfectly balances patience and aggression. As I watched his film, I was floored by how many times he froze a defender in space. It was as if they’d completely forgotten everything they’d ever learned about tackling.

Elliot’s ability to break a long gain at any moment not only fuels one the best rushing attacks in the NFL, it also leads one of the best play-action passing attacks. The play below perfectly exemplifies what I’m talking about:

It’s third and one. The Eagles’ front seven all come flying up to stop Elliot. By the time Jordan Hicks (#58) realizes it’s a passing play, it’s too late. The right tackle pushes the left end out wide, meaning there is no help on the edge. Hicks is the only player who can make a play and he over-pursues just enough so that when he recovers, he’s two steps behind. A well placed pass from Prescott has Elliot in the open field for a huge gain.

For some reason people soured a bit on Prescott last season. As I sat down to watch his film, I have no idea why. As much as we hear about his speed and escapability, it was his accuracy that jumped out on film. To return to the play above, even though it might look like an easy throw, it is far from it. If the pass is under-thrown not only might Elliot be unable to catch it, Hicks might recover in time to knock it away. Over-thrown there’s a good chance Elliot is tackled for a minimal game. If Prescott does what many young quarterbacks would do (looking at you, Deshone Kizer) and tries to roll out a bit, he’ll be sacked.

Instead Prescott gives a great fake, looks downfield long enough to force the defensive backs to fall back, and climbs the pocket. He sets his feet puts just enough loft on the ball for Elliot to secure the first down and then turn up field. When this happens, it’s hard to fault Hicks. There are very few linebackers who could track him down in the open field. 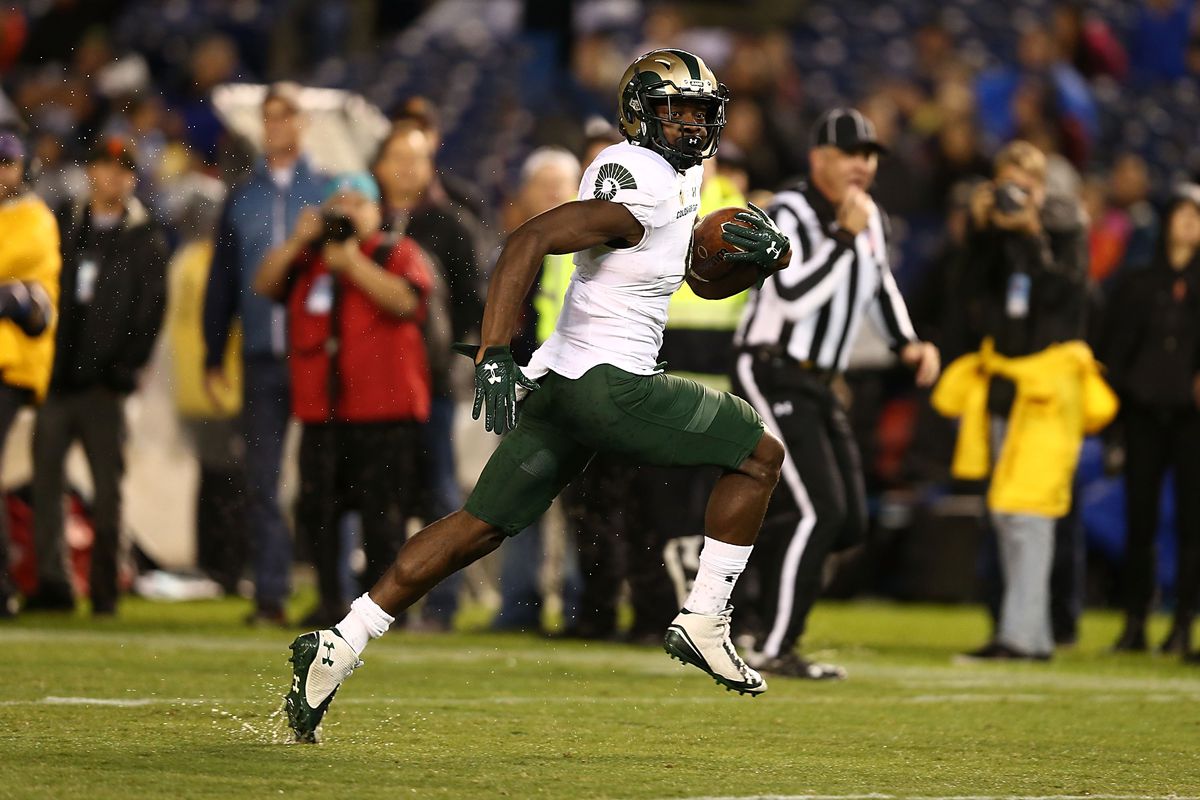 Defenses must respect the running game and that will allow the receiving corps more room to work. Even though none are a “prototypical number one”, Cole Beasley, Terrance Williams, and Allen Hurns are savvy enough to beat both one on one and zone coverage. Don’t sleep on draft picks Michael Gallup and Cedrick Wilson either. Both figure to be very dangerous out of the slot. Particularly on mid-level crossing routes, as Prescott rolls out on bootlegs. Gallup could end up being the steal of the draft. He has solid hands and a very quick burst. Throws within five yards have skyrocketed in recent seasons because of players exactly like Gallup.

With Jason Witten retiring, there is a very solid argument he will be harder to replace than Dez. After all, it is impossible to run effective play-action passing plays without a good tight end. Last season the Eagles tried to steal Blake Jarwin off the Cowboy’s practice squad. The Cowboys surprised everyone with how quickly they moved to keep him. Word out of Dallas is that they expect very big things from Jarwin. This explains why they never made a big splash after Witten retired.

Another tight end to watch is draft pick Dalton Schultz. Schultz is not a great blocker, but like all Stanford tight ends from the last decade, he’s a very good receiver. Both should provide safety-nets for Prescott and excel in the play-action passing game. 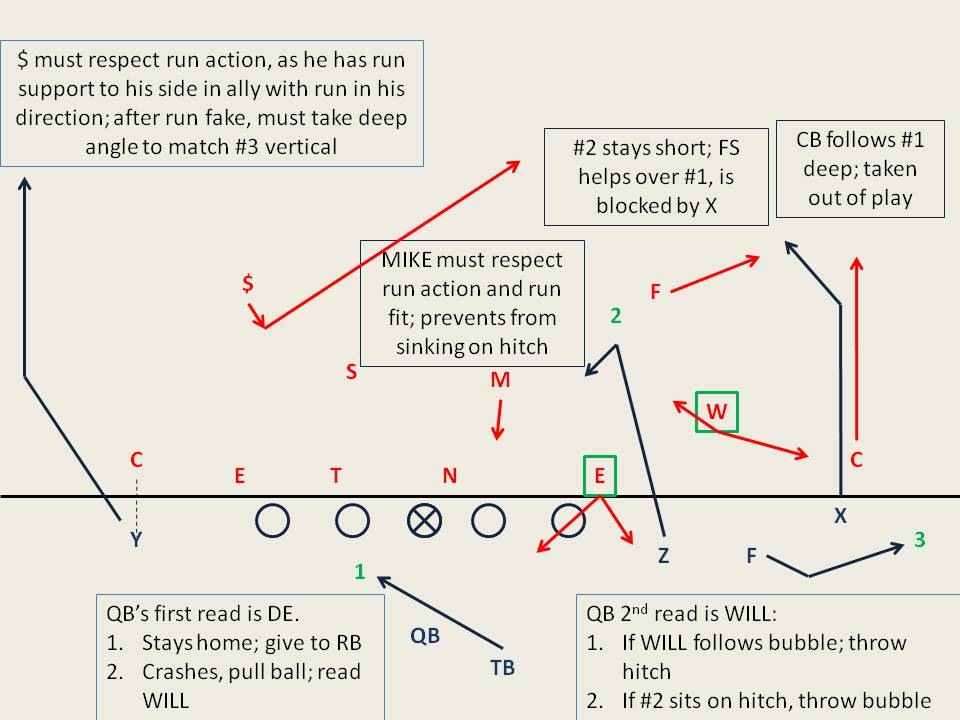 Okay, so the Cowboys have a great line, perhaps the best running back in football, and an underrated receiving corps. Now what? Nothing has been mentioned about a replacement for Dez as the “number one option”. Nothing is going to, dear reader, nothing is going to. The Cowboys don’t need a “number one”. They just need to be a bit like their division rivals in Philly and build an effective RPO attack.

On the play design above, the Cowboys can feel free to split everyone out. Their line is good enough to handle the run blocking without a tight end on the line. As I said earlier, whenever Elliot is on the field the defense has to follow him. The Mike cannot drop to cover the hitch, if he does, Prescott will hand the ball to Elliot. Martin, Frederick, and Williams can easily handle the Nose and the Tackle, while Collins crashes down on the Mike, leaving the End to dictate the action. This leaves Elliot with a Mike-less seam and a Mike-less cut back lane. Good luck stopping him. Beasley and Gallup can catch the ball on the bubble pass and be gone in a flash. So, the Will must follow them. This removes him from run support. Hurns and Williams will be afterthoughts on the deeper routes, which is dangerous for whoever is matched up on them. Prescott is so accurate, he’ll have the ball where only they can make a play. Hurns is 6’3″ and Williams is 6’2″, they can jump over most corners. Safety help is almost impossible as it would leave the Mike on an even larger island, especially as the Will follows the bubble. Even if the defense is somehow able to stop all them, don’t forget how fast Prescott is and how he’s smart enough to avoid the big hits.