My grandfather and I had a running argument. He thought Tom Landry’s practice of accumulating draft picks was more influential on the modern NFL than Bill Walsh’s West Coast Offense. I disagreed with him. The game had become so reliant on passing that Walsh was the clear choice. For years this argument raged on. Five years ago, I decided compile the information that would end the argument once and for all. About three minutes into my research, I did find a way to to end it:

We were both wrong.

The coach from the 70’s and 80’s that left behind the greatest legacy was Don Coryell and his famous “Air Coryell” offense. I couldn’t believe that I had never heard of him before and that so many of his concepts became foundations of the modern passing game. I also couldn’t believe I still associated his quarterback, Dan Fouts, with the Waterboy. “Last game of the year, Brent. Can’t hold anything back . . .”

Anyway, here are the biggest innovations from the offense that changed football.

It’s so common in the modern game that it seems strange to imagine a time when teams did not regularly put receivers in motion. Even at first, this was something that was exclusively done with wide receivers. Croyell turned the NFL on it’s head by using motion not just with his receivers, but with his running backs and tight ends as well. Doing so provided three key tactical advantages: 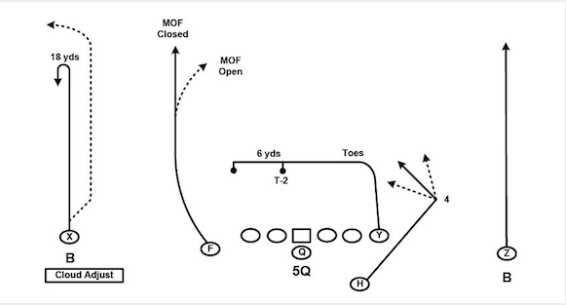 Before Coryell, the basic philosophy in football was to run the ball early, often, and sometimes exclusively. Doing so from the standard pro-set (two backs, one tight end, and two receivers) was the foundation of every team’s offense. Passes were often heaved down the field or checked down to the running back.

Coryell took Sid Gilman’s offense and altered it to force the defense to defend the entire field. He changed around his formations, often relying on a single running back and multiple receivers. The Chargers ran power running plays and threw deep just like the other teams, but they added screens and mid-level routes to exploit holes in coverage. If a team brought their strong safety up to stop Chuck Muncie, they could hit Kellen Winslow running up the seam. If they ran the same play and the strong safety followed Winslow up field, Charlie Joyner or Wes Chandler could break off their route at 10 yards, plunging into the gap in coverage.

Put the quarterback in the shotgun and the play above has become standard in the modern passing game. When commentators say, “look how he goes through his progressions”, this is what they are talking about. Coryell was the first coach to have such a large variety of options on each passing play. In many cases, he instructed quarterback Dan Fouts to look long first and then see if anything had opened up underneath. He also, like Walsh, preached precision telling his quarterbacks to throw to a spot, not a man. The next time you see Brady, Brees, or Rodgers look right and then hit the back shoulder fade on the left, think of Coryell.

This biggest change Don Coryell made to the passing attack was with his use of Kellen Winslow. Before “Air Coryell”, most tight ends were really just extra offensive linemen who would run a drag route here and there. I imagine that had Rob Gronkowski played in the 70’s, his coach would have told him to pack on pounds because he was moving to offensive tackle. On most passing plays, the running backs and tight ends pretty much hung in to block, then Coryell unleashed the five receiver attack.

Winslow was an absolutely nightmare for the defenses of the time. Many teams did not play with the sub packages that most teams now rely upon. They tried to cover Winslow with outside linebackers and he blew past them. Even strong safeties (who were essentially extra linebackers) could not cover Winslow. He moved all around the formations. He could play on the line, he could play in the slot, or he could split out wide. Perhaps nothing sums up the legacy of “Air Coryell” better than that. No longer did players have to fit rigid position molds. They could be moved around like chess pieces exploiting weaknesses on the opposing team’s defense.

The next time you sit down to watch an NFL game I hope that you, like me, fully appreciate just how much Don Coryell has influenced the modern passing game. And, if not, then perhaps my Friday follow up slide show can convince you . . .