It occurs to me as a peruse my first few articles that I spent quite a bit of time poking fun at the Browns. Yes, they are my favorite team and they have been terrible for my entire football watching life, but  it also occurs to me that I’ve wandered into the classic, “Oh, so you think you can do better” trap. Yes, imaginary adversary, I do think. I do think a great deal.

Without further adieu, here are the five things I would do if I were in charge of the Browns organization . . .

Give Cohesion A Try Remember Romeo Crennel? He’s the last Browns coach to last more than two seasons and he was fired almost a decade ago. Scholars maintain that this is last known photograph of him smiling after he took the Browns’ head coaching job. We were told he would be bringing “the Patriot” way to Cleveland from New England. He even signed a hero from the early years of the Patriots’ dynasty in Willie McGinest. It could have also just been an old man in a McGinest jersey, we’ll never know . . .

Since then the Browns have changed coaches a whopping FIVE times. What’s even worse is that they’ve also drastically changed schemes. Here’s a quick run down:

Pat Schurmer: Conservative 4-3 defense, punishingly complicated West Coast offense (with a lead receiver in Greg Little that could do everything except catch the ball)

Hue Jackson with Ray Horton as the DC: Attacking 3-4 defense sans attackers, yell “offense” at the field and see if anything happens offense

Hue Jackson with Greg Williams as the DC: Attacking 4-3 defense with Jabril Peppers comically out of place as the deep safety, throw in desperation, hope, cry, hope offense

Needless to say, it is impossible to find players not named Joe Thomas that can function in this chronic scheme fluctuation. So, John Dorsey, you’re stuck with Hue Jackson for at least three seasons. You had your shot to start over and you passed. As crazy as it sounds talking about an 0-16 team, the Browns are not that far away from being decent. They had a strong offensive line, three talented tight ends, a great do-it-all weapon in Duke Johnson, and an extremely talented front 7 on defense. With the right pieces this off-season, they can be respectable.

THERE IS NO NEED TO BLOW IT UP AND START OVER AGAIN!

The only revolving door in the world larger than the Browns head coaching position has been the quarterback position. I could name them all here, don’t worry I won’t. We’re all busy people and don’t have time for such an epic list. From the moment they came back into the league, the Browns have been searching for a quarterback. I thought they had it locked up twice. Once with Derek Anderson and once with Brian Hoyer. It was not meant to be as it turned out and the search doth continue as they say (they being me and me alone probably).

Fortunately for John Dorsey, this year they not only have the first pick in the draft, it also happens to be a quarterback rich draft. My personal favorite in this year’s draft is Baker Mayfield. If the Browns took him I would be happy. Unfortunately, he and Johnny Manziel are firmly linked in the minds of many fans and members of the media. I think that alone is enough to avoid taking Mayfield.

Instead I would draft Josh Allen. I know the numbers are not pretty, but watch the Senior Bowl tape. With a lot of coaching he could be a great one. I would also sign AJ McCarron to a three year contract. I would plan on starting McCarron for two seasons and then making a decision. They could keep him if he’s done well or move on to Allen if he’s been anything less than spectacular. This works for all parties. McCarron is still only 27 and needs to prove himself before he gets the “back-up for life” tag.

He knows Hue Jackson from their time together with the Bengals and knows Todd Haley since Haley is coming over from the Steelers. He also would only be 29 at the conclusion of this two year plan I’ve outlined. With starting experience he can at least catch on as a high paid “competition” guy for the next crop of young talent.

Allen needs a few seasons to develop. He needs to improve his accuracy and based on his 56.3 % mark last year, that might not happen for a while. Worst case for the Browns, McCarron works out and Allen becomes one of those mystery back-ups teams get enamored with. Matt Schaub to the Texans, Jimmy G to the Niners, are examples of that working out. Warning signs in this scenario are Charlie Whitehurst to the Seahawks and Rob Johnson to the Bills. Point is, if he never figures it out, they can rely on the league’s love of a mystery player.

If he does work out, then the Browns will finally have solved the puzzle that every season it looks like they will never solve. Every time I watch the Senior Bowl, I believe Josh Allen is that guy just a little more.

Greg Williams’ defense relies on what he calls the “angel” position. This is a safety that plays extremely deep and allows the front 7 to attack. Last season the Browns had no one on their roster to play this position. With no other option they stuck poor Jabril Peppers back there. Let’s take a moment and review how stupid that was: he was drafted as a hybrid defensive back-linebacker, he struggled with coverage in college, and he was supposed to come in return some kicks and be a Swiss Army knife on the defense. Instead he was asked to do the one thing scouts accurately pointed out he shouldn’t be trying right away. Grumble.

Reviewing the draft, the best player for that role is Minkah Fitzpatrick. He could also be a great corner, slot guy, or “put him on the best receiver and let him play” guy. He is exactly what the Browns need to let Myles Garrett and Emmanuel Ogbah go wild. Between those two and Carl Nassib, they have the foundation of solid pass rush. All they need now is the defensive back that can make the back breaking interception as the pass rush causes a fluttering mistake. I’ll expand in later articles, but I love everything on this guy’s tape.

Yet, all the mock drafts seems to have them taking Saquon Barkley. No offense to Barkley, he is a good back. I just hope they don’t take him. There are running backs later in the draft that  pair well with Duke Johnson. As we saw from both teams in the Super Bowl, the days of the feature running back are coming to an end. Say the Browns take Barkley and he gets hurt like Trent Richardson. That’s two wasted top-five picks on running backs in less than ten years. Unacceptable. Make the smart pick, Mr. Dorsey. Take Fitzpatrick.

I hope to one day realize my dream of erecting a Mount Rushmore of Cleveland mistakes. It would amuse me.

The center of the monument would be Kenny Britt, whose tenure in Cleveland made Johnny Manziel’s time seem not so cataclysmic (remember that throw to Travis Benjamin against the Titans?) Signing Britt was not only a calamity that produced almost nothing on the field, he was also a poor role model off the field. Corey Coleman is already potentially on the roster chopping block; he didn’t need Britt keeping him out all night in Houston.

The Kenny Britt debacle became even Brownsier when they simultaneously decided to move on from Tyrelle Pryor. This is where the new age front office let the stats lead them astray. On a spreadsheet, Pryor and Britt had similar seasons. They had roughly the same amount of catches, yards, and touchdowns. They even had similar situations being the primary receivers for a series of “wait, who’s starting at quarterback this week” guys in both Cleveland and St. Louis.

It was how they got there that was drastically different. Pryor was a converted quarterback that put up 1,000 yards in his first full time season as a receiver. Britt was an enigma journeymen who landed on a team with no other options. 1,000 yards in a season is the first milestone for a receiver. If you’re a football team, you choose the guy you didn’t know could even do that, not the guy you can’t believe finally did it.

Fortunately for Browns’ fans, the team can rectify that mistake and re-sign Pryor in March. I know he didn’t have a great season last year for the Redskins. The reports say he was hurt and if that is true, then bringing him back is a no brainer. Pryor, Coleman, and Josh Gordon sound like a good foundation for the receiving core. 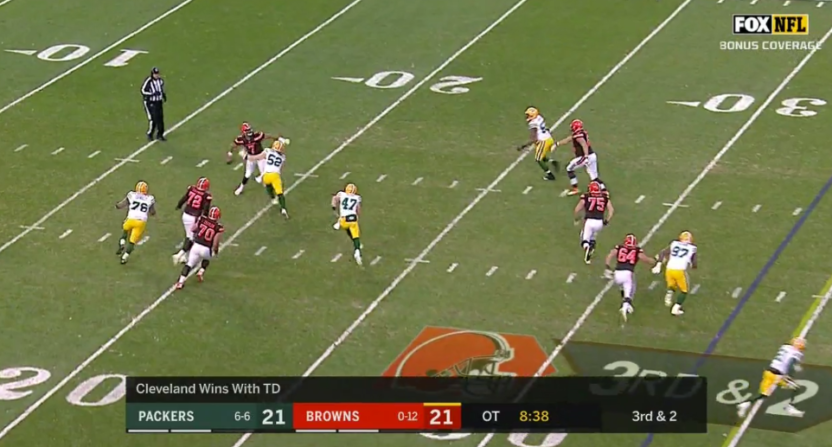 Every time I try to write this section, I start typing the worst profanity you can imagine and must start over. The photo above is the exact moment Deshone Kizer threw the game-losing interception against the Packers. This was on 3rd and 2. Hue Jackson thought it was a good idea to throw the ball on 3rd and 2 with a rookie quarterback in a game that had already seen them blow a 14 point lead in the 4th quarter. I don’t even remember if they had a running back on the field! Ridiculous.

I would also like to add that the mere fact that Isiah Crowell did not have a single game with 20 carries or more is a travesty. This is a young team that cannot be asked to pass their way to victories. New Offensive Coordinator Todd Haley is going to have run the ball early and often if they are to have any chance of being competitive. He must take pressure off whoever the starting quarterback is; he must be more disciplined than Jackson as a play-caller.

The Browns went 0-16 last season. I know this and yet cannot stop feeling slightly optimistic about the direction they are heading in. With the right picks, this franchise could start turning around.

Or they could be the Browns.