To this day, I have no idea what Al Davis was thinking when he traded Jon Gruden to Tampa Bay (never forget that’s how it happened). There’s a lot about the end of the Davis Era that doesn’t make any sense, but this was the biggest head scratcher.

At the time he was traded, Gruden was a controversial call away from back to back AFC Championship appearances. Not to open old wounds, I just have to point out I still have no idea how that wasn’t a fumble. Please someone look at the image below and tell me how this counts as a throwing motion: 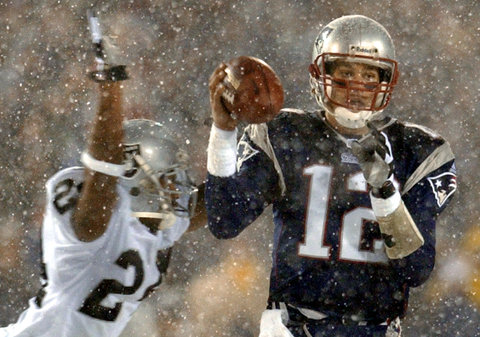 I thought this was going to be the start of a decade long rivalry between Oakland and New England. Even though the Raiders did make the Super Bowl the year after, it was the beginning of a decade of ineptitude on their part.

Davis decided he wouldn’t offer Gruden a lucrative contract and couldn’t get on board with his West Coast offense, preferring to return to a vertical passing attack.

Let’s take a look at the five years that followed the Gruden firing:

2005: 4-12 under Turner, Randy Moss and Lamont Jordan improve the offense, they cannot win close games losing five by a touchdown or less.

2006: 2-14 under Art Shell, Andrew Walter and Aaron Brooks are the quarterbacks setting the stage for He Who Must Not Be Named . . .

There’s no way of knowing, but I truly believe if Davis had kept Gruden, they would have been better. Rich Gannon still would have fallen apart on the same timeline, leaving them with the #2 pick in the 2004 draft. I really think Gruden would have pushed for Rivers or Roethlisberger. Roethlisberger would have been a compromise for Gruden and Davis. He had the big arm to stretch the field, but also the mobility and footwork for the West Coast second level attack.

We will never know what might have happened. Which is fine because now the Raiders have given us a new narrative. They have decided to rectify their mistake and bring Gruden back as their coach. They are also giving him a team he has never had: young and on the rise. 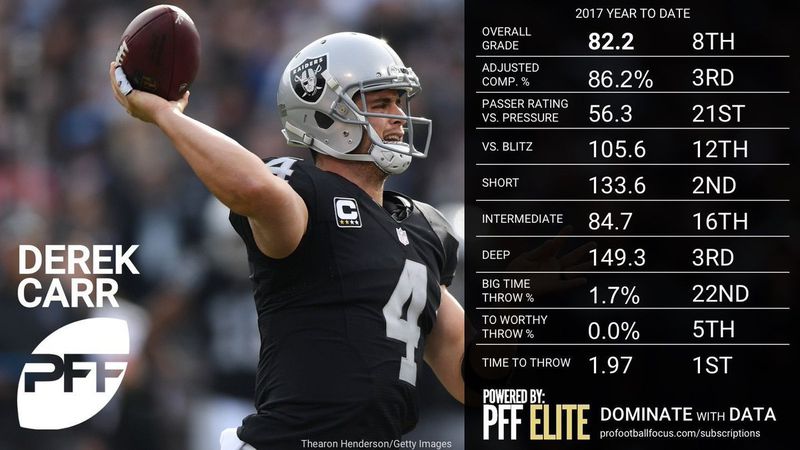 I’m still not entirely sure what to make of this. Even as I sit here trying to type this article, I feel myself being torn apart by separate narratives:

On one hand, I feel like this is the perfect situation for both Gruden and the Raiders. The Raiders bring back the last great coach they had just as they are preparing to relocate to Las Vegas. Vegas is an unknown market and bringing in a team with a big name coach is good way to inspire optimism.

Gruden gets to come in and work with a quarterback that has the talent to run his offense. It’s also a guy who Grudren seemed enamored with on his ESPN QB Camp. He  has two elite wide receivers to pair with Carr in Michael Crabtree and Amri Cooper. Khalil Mack (26) provides a building block on defense 3-4 years younger than Derrick Brooks (29) and Warren Sapp (30) were when he took over in Tampa. The game has changed exponentially since Gruden left. I always imagine draft rooms looking more like something out of A Beautiful Mind than the pre-computer, smoke filled draft rooms of old. I don’t think teams should rely solely on data, but they need to be able to use it. The college game and the pro game are completely different, as Gruden himself has angrily pointed out, so a coach needs to be able to identify aspects of a player’s game that will translate to the pro game.

This is especially critical for someone like Gruden running a West Coast system, which is punishingly complicated compared to any college spread system. Imagine coming from a college team that runs maybe 20 plays and trying to learn an offense with four slightly different versions of each play:

I would like to know how he plans on doing this without data. I guess he can watch film. In my mind though, the amount of time it would take to gather the same noticeable trends conveniently provided by analytics would be better spent scouting opponents and scripting playbooks.

So I don’t know. I don’t know how I think it’s going to play out. All I do know is that I am fascinated to see the end result. If nothing else, this is a truly unique tale. I don’t think a franchise will ever again trade a coach and then hire him back 17 years later. So, we’re about to witness history. Gruden’s adaptability (or lack thereof) is what will dictate just how long the experiment lasts.