Seriously, it’s a fucking sign. I get that it’s made out of tarp, but guess what, tarps are awesome.

What covers jeeps, soldiers when it’s raining, baseball fields, and roughly half of the seats in Jacksonville? That’s right, a goddamn tarp. It’s easily the most patriotic of all fabrics, except for whatever they make the flag out of (I’m guessing polyester, but I’m too lazy to actually google it). So I’m done hearing all of the whining about how cheap or bad it looks in front of the stadium.

In fact, cheap-looking signs typically tell you something good is on the inside of a building. Ever go to a restaurant with one of those cheap open/closed signs? The food is usually pretty good, and that’s probably because they care more about the product than the decor.

They could scotch tape a seven by eleven inch piece of printer paper that says “the Broncos play here” written in yellow crayon and it wouldn’t matter. Literally nothing you put on a sign could make it worse than the Oakland Coliseum, and that’s a fact. Also, Mile High could be occupied by 50,000 French people in the dead of summer and it would still smell one hundred times better than the Coliseum. Seriously, that concrete heap has been peed on more than Jim Irsay’s mattress.

Whenever you go to a Raiders game, there’s this long concrete bridge surrounded by a chain-link fence you have to cross that makes you feel like you’re entering a state penitentiary, which is ironically where most Raiders fans just left.

Most importantly, it’s temporary. If they really thought they wouldn’t find a corporate sponsor for a while, I’m sure they would cough up a few thousand dollars and get a real sign with a little bit of showmanship.

I will say this, however: I wish they would listen to the idea I had on the podcast a few weeks back. Name the stadium after an incoming late-round rookie every year. Either the rookie rises to the occasion and balls out, or he wilts under the pressure of having an NFL stadium christened in his honor. Either way, if he’s a late-round guy, it’s high-risk, low-reward. Imagine Troy Fumagalli Stadium at Mile High. Suddenly, the Chiefs catch wind about the name and think “oh man, this guy must be the real deal” and spend the week preparing for him. Joke’s on them, because that lets Jake Butt sneak in under the radar and catch two touchdowns. Genius. And if any owners/GMs are reading this, you’re welcome for the idea (I have a lot more, too).

By the way, no stadium sign is beating this: 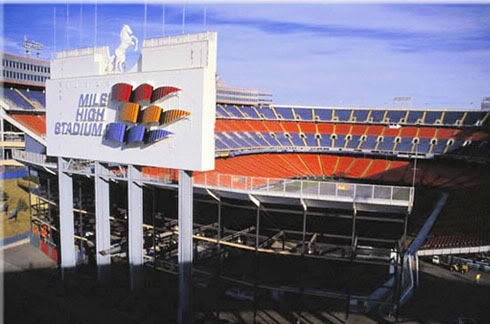